Why “American Ignorance” is the Best CCP Propaganda Trick, and Why it Works

It’s 2020: so far this year, the U.S. has seen millions of people demonstrating support of black lives, has had multiple articles published about the rising tensions caused by “political correctness,” and had an attempt to oust the current President because of his “racist” inclinations. In addition, in recent years performing and visual art attendance has increased³ and a higher focus towards art and culture in schools has been implemented. If you asked the average American, they would probably consider themselves informed on important matters affecting the world today. Yet, there are other governments, such as in China, consistently defining Americans as ignorant and selfish, and not many choose to question it. Why is such a statement, which Americans would find mostly untrue, working to deceive others so easily, especially when something like being culturally aware and racially accepting is the apex of every conversation from American pop culture to political debates? 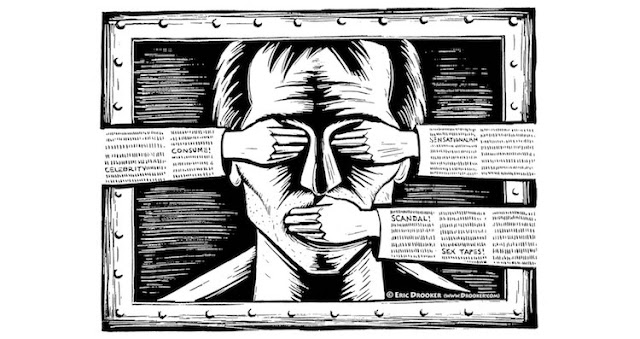 Most people nowadays are aware of the Black Lives Matter Movement, and some of their accomplishments: from getting a street and plaza renamed to involving 500,000 people in protests all over the U.S. during the COVID-19 outbreak. Today, protests are still raging in Chicago, Portland, and New York, with no resolution on the horizon. Race and culture have been on a sliding spectrum from racist, culturally appropriating and stereotypical to supportive and culturally aware. It’s a slippery slope for many, and news sources are quick to feed anyone to the wolves if they slip too far into a racist or insensitive sentiment. Hopefully in the future, we all learn to not take everything seriously, but it’s safe to say that tensions are at all time high about whether something is “politically correct” or not, as most Americans want to be supportive and not be mistaken for ignorant.

On the other side of the world, you have the Chinese Communist Party (CCP) that has stated the U.S. is more ignorant than ever. In a recent article, state-media accused the U.S. population of being swept up by a new “Red Scare” fear-mongering and are unable to make “informed decisions” about China, especially, because they “don’t study Chinese and don’t know about China.” Rhetoric like this is quite common from the CCP, and with tensions escalating between the U.S. and China since the commencement of the trade war, there has been a steady increase of it on both television and radio all over the country.

Now, to be fair, the U.S. has been ignorant about China for some time now. In Brigadier General Robert Spalding (U.S. Air force, Retired)’s book Stealth War: How China Took Over While America’s Elite Slept, it goes in-depth about how a blind eye has been turned to many CCP issues, such as how they have advanced their military by stealing U.S. intellectual property and have infiltrated our science laboratories. The U.S has also been ignoring the gross human rights violations occurring in Xinjiang against the Uighurs (including sterilizing woman and performing forced abortions, child abuse, and live organ harvesting), the spyware installed in Huawei devices and on Chinese apps like TikTok and Wechat, and how, although done quietly, CCP members have been systematically buying mass amounts of U.S. property and have acquired more than billions in assets from the U.S. since 2002. Only earlier this year were the funds from the Thrift Savings Plan limited from being invested into Chinese companies.

As a reminder, this is the Chinese Communist Party we are talking about, meaning they own a percentage of every Chinese business. So, where does this percentage of revenue go that the CCP is entitled to? It’s difficult to say, but something to consider is that in 2018, China’s Defense Budget had increased 850% from the previous 20 years (an increase from $20 billion to $170 billion according to China) and in 2020 it is now at $178.2 billion. How can a country support that kind of increase in their budget without a newly tapped source of funds? Where could the funds be coming from? To clarify, the CCP has a lot to gain if the U.S. remains ignorant about what they are doing  so they can continue with profiting off U.S. citizens and the economy. A combination of tactics is used to keep the Americans from understanding the CCP’s true intentions: controlling information from leaving their country (like how they kept information about the Wuhan Novel Coronavirus from the rest of the world in an act of blatantly allowing spread) and attempting to silent all individuals speaking out against them. American’s must also understand that a government does not equal a country and its people; it can actually do many things the people do not approve of, especially in non-democratic nations.

So the question is, are Americans as ignorant as the CCP says? The CCP has both directly and indirectly threatened the integrity and safety of all world citizens: normally these consequences would be immense to bear. The U.S., which has been reported as being at one of its most divided times, will need to unite citizens to encourage freedom and understanding, like the Hong-Kongese who have recently come under attack by the CCP,  like Apple Daily owner Jimmy Lai, due to the new Hong Kong National Security Law. Despite the increasing danger, protesters are still making five clear demands to the government so that Hong Kong citizens are entitled to the same democracy the U.S. has and is meant to upload.

We are living in a time where information has never flowed more freely (except in countries where they censor, like China) and Americans are learning how to make more informed decisions than ever. They have proven they want to support people of all backgrounds, cultures, and creeds. However, if there is a government easily convincing 1.6 billion people or more that Americans are ignorant and uncultured, can they really say that they are succeeding in creating change? This question can only be answered with action: to improve the U.S. through peace, to eliminate the threats to essential values like Freedom of Speech and Freedom of Expression, and to better our lives with happiness and sincerity. This is our fight, too.

Works Cited (in order of appearance):

19.Passy, Jacob. “The Chinese Purchase More U.S. Residential Real Estate than Buyers from Any Other Foreign Country, but Trump’s Trade War May Change That.” MarketWatch, MarketWatch, 16 May 2019.

25.Manchester, Julia. “Jimmy Lai’s Arrest Is a Blow to Press Freedom in Hong Kong.” The Economist, The Economist Newspaper, 3 Oct. 2018.

This announcement has been posted on the front door of the house of Chinese calligrapher and painter Li Jinshan in Beijing a few days ago:

He is being forced out of his only home and art studio during the second wave of the #CCPVirus outbreak in Beijing, and soon to be 2000+ other families of the common people, or “old hundred names” as #SteveBannon always says.

Protests of the people

After Li & other villagers had been fighting for their rights & properties for almost 3 years, Li had to abandon his house and beautiful garden that he had been tending to for many years. Before he left, he relocated a bird’s nest which had been built inside his kitchen’s ventilation, forcing him to tolerate smoke from cooking for half a year. He was worried that the birds would be killed by a bulldozer when the thugs hired by the Chinese government tear down the whole village.

The beautiful garden of Li

There are many artists who lived in this village, like Li, that do not praise the Chinese Communist Party. They have been creating art as a way of expressing their freedom of thought, but there’s no such thing as freedom allowed on the land of the #CCP.

The destruction of a nearby village

Culture and art are treasures of human civilization. Li has said that we are a part of civilization, and no one can deny the CCP’s existence affects everyone’s lives. By spreading this story and the truth of the CCP to your friends & community, it is the simplest way for us to fight them.

Freedom and Democracy have no bounds, this is our fight too.

This site uses Akismet to reduce spam. Learn how your comment data is processed.

Destroying art is a way of destroying freedom of thought.by Pistachio / August 6, 2020
What is the importance of Taiwan to the CCP?by Pistachio / November 22, 2020